I had been coming down with something for a few days but on Monday morning it hit me full on! Went to the doctor’s and he told me I had to stay in bed for three days.

Well, I’m not good at staying in bed… There’s only so much TV I can watch. I felt a bit better yesterday, as long as I was sitting down and not thinking to hard 🙂

I had some fabric left over from the pajama pants I made my cousins for Christmas. (To be fair, I had bought way too much fabric) The idea was to make pajama pants from that same pattern and make a pajama top using the Banksia pattern. I had visions of flannel plaid with lace hems. I drew what I wanted it to look like. In all honesty, I can’t draw so I just copied the girl on the Banksia pattern, bit worried it’s copyright infringement or something.

As I love lounging around in my pajamas on a Sunday, but most of the bought pajamas look too much like pajamas. I wanted something that wouldn’t make me rush to the mailbox in fear of being seen in my pajamas but made me strut proudly down the driveway!

So the first idea was to use the same pattern for my pants as the one I used for my cousins. But because they are very very slim and the legs weren’t tapered, I was afraid my pants would just end up being way to wide at the bottom. I didn’t like the fit around the back either. So after some debating (with my inner self) I decided to draft the pants myself.

I did cheat a little bit, took a pair I bought once and really liked and measured those up. I even wrote it down in my notebook 🙂 It’s the first time I actually took the time to sit down and think everything over and plan in advance rather than figuring it out along the way. Looking back, it made it a lot easier for me because I knew in advance that I had everything I needed so I could just get on with things.

I drafted the pattern, traced it on regular pattern paper and cut it out. Did I make a muslin? Ofcourse not, why would I make an easy to sew model before bothering with matching up all the plaids. (That’s sarcastic me talking)

Luckily my cat (Noodles) was there to supervise the project until I had all my pieces cut up and put on a neat little pile. (For the record: I hate matching plaids) 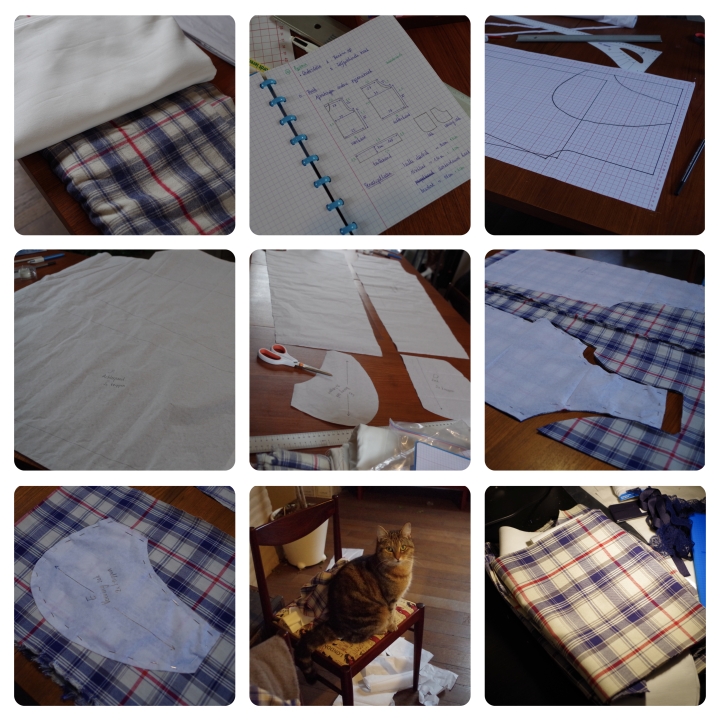 I was thinking about doing a small tutorial on how I did it, but then I struck me, everyone reading this knows how to do pajama pants and I’m not that good yet. So i just took pictures of (almost) every step so you can see what I did.

The banksia top part was fairly easy, as I did it 3 times before 🙂 The only hiccups in the process was the bias tape I used to face the sleeves. I had to do both sides twice because the thread kept bulging. In the end I’m very happy with how the top turned out, the only thing I can’t seem to fix is the fit of the collar. On each one the collar isn’t matching up in the centre and I don’t know how that happens. I’ll have to look into it next time. 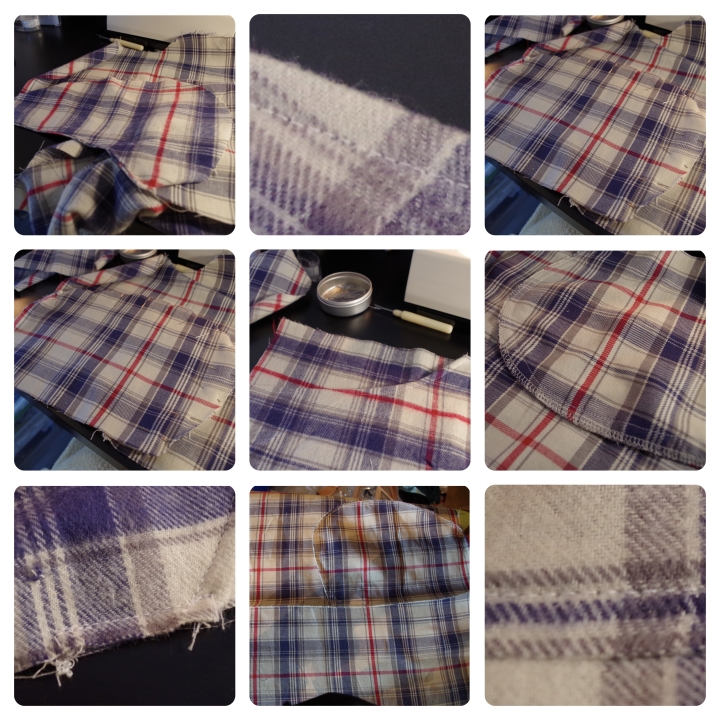 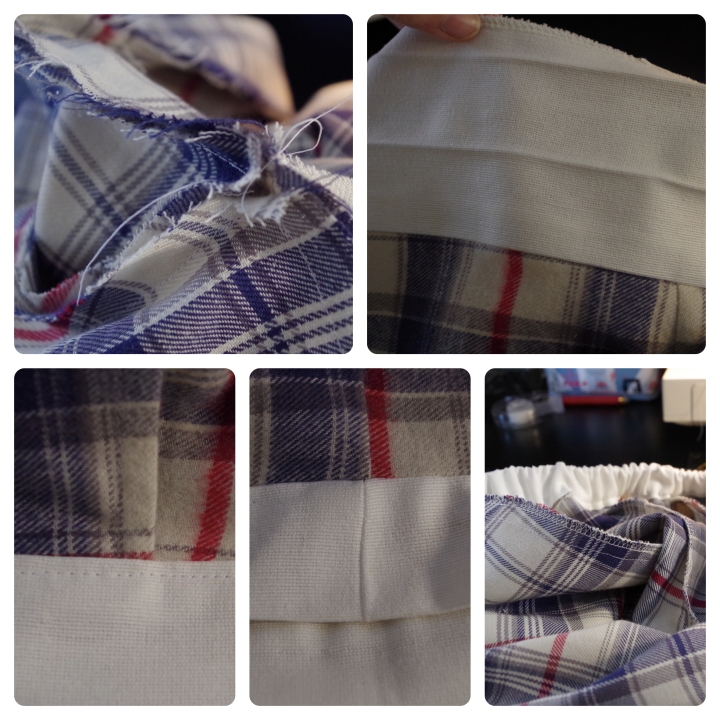 The pants were fairly standard and I made sure I pressed every seam meticulously. I also topstitched over every seam and it looks great! The hard part really was getting the elastic in. The waistband was maybe a bit too well measured but in the end I pulled it off.

Every red line on the pajama matches! I’m so proud of myself! Even the lines of the pockets match up so they seem ‘invisible’ when you look at them.

The fit of the top is great, no changes there. I should however alter the fit of the pants a bit. Lower the waistline in the front and make it a bit higher in the back. But apart from that nothing that i could have done better.

I especially love the white waistband that matches the collar on the top. I wanted to put a drawstring in but in the end decided against it as it was merely decorative. I also left off the lace because 1. It’s busy enough as it is 2. There’s 15 cm of snow outside and the temperature is -14. I wasn’t going to get in my car just to get some lace.

It’s save to say that I love the way this turned out, I made it sleeveless because I can’t stand sleeves when I sleep, I need my arms to be cold. During the daytime I just put a cardigan on top and I’m good to go. It has the boyfriend stamp of approval although he thinks it’s too classy for pajamas. I don’t care, nothing wrong with classy self made pajamas!

I want to wear this to work btw!

4 thoughts on “Banksia Pajamas: What to sew when you have the flu!”