I love sewing, but sometimes it’s a hobby which can get a little expensive. Especially when you need (read: want) all the available notions. Who can say no to gorgeous buttons and pretty ribbons… I for sure can’t. So I try to save on each one if I can by looking for a cheaper replacement.

But sometimes, sewing karma comes back to bite you in the ass.

One of the things I frequently use is fusible hemming tape (or fusible web). I use it in all widths because I find it practical when hemming. The hem just doesn’t shift while sewing and it often adds just that little touch of stability that makes everything sit nicer.

However, these things are difficult to come by in Belgium, not every store has them. I’ve actually only found one store which stocks it but it’s a 30 minute drive (for us Belgians, that’s a lot) and it was quite expensive (10m for 11 euro) so I looked for something cheaper online.

I finally found some on Amazon and since it was about a quarter of what I would normally pay, I ordered it. Biggest waste of money ever!

How it should work:

What was wrong with it?

So I drove down to the store anyway to get some decent fusible web and I bought every packet they had (they had only 3 of them). I’m never ever using anything else ever again.  If you want to buy some of your own, you can find it here. 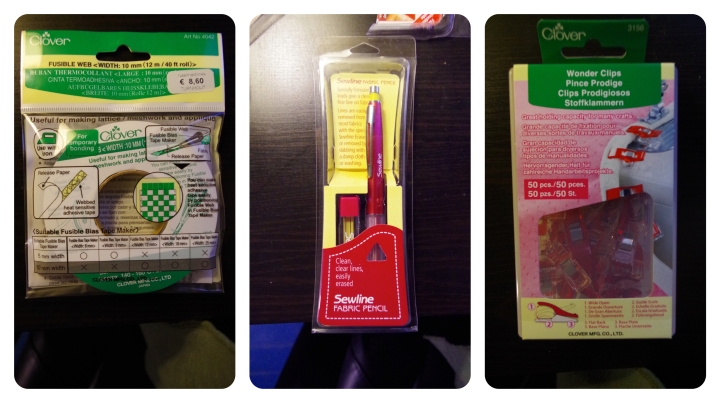 It was slightly cheaper than last time, so that made me happy and since it’s a very good store which sells quality sewing machines and quality (mostly quilting) notions, I had a look around for other nice stuff. I finally left not only with the fusible web but also with tailor’s chalk which comes in the shape of a very fine refillable pencil (My other refillable chalk pencil is quite thick so not very accurate) and some Wonder clips to hold down binding or thick layers of fabric. I hope they all give me great sewing joy!